Tournament report: Flames of War - the End of the Beginning

on June 01, 2018
On Saturday the 26th of May de Purperen Draak and the Groninger Wargamers Guild co-organised our first Flames of War Mid War tournament.
We'd had Late War tournaments for years, but with the new MW revamp we felt it was time to get the community going for that, too.

This would also be the first tournament at the store since it became the official distributor for the Netherlands.

Despite some cancellations we still had a total of eight local players who took part in this and we all had a great time. We also had a nice 4:4 split between Axis and Allies, with all players using lists (though not paintjobs) appropriate for the North African theater.
We allowed players to field lists from the old Eastern Front and North Africa books using the conversion rules if they had not yet been updated in the new releases; in the end, only one player decided to go with that option.
We also allowed some limited proxies (such as using a different kind of Sherman) to make it easier to put a list together.

The points limit was 72 and we used battle plans to determine which scenario to play.
We had 4 players picking attack, 2 picking maneuver and 2 picking defend.

There were some serious “oooooh no” moments throughout the tournament, with various people's (most notably Phil’s) dice not working for the first two rounds, then in the third round Phil's made up for the whole day thanks to the blessing of Albert Martijn.

On the other end of the spectrum, Siebren managed to roll seven ones in a row in the final round.
This is a record for us and we are proud of his achievement here and we will make sure he never forgets this.........

The Allies were badly battered in this conflict; all Allied players lost in the first round and in the end the highest-ranked Allied player was 4th. We will do better next time, we promise.

The final round was a really close finish with Albert Martijn, Gilles and Marko going for the overall win. Marko had a comfortable tournament points lead but was struggling against Gilles in the Breakthrough mission. Marko's Tiger managed to clear out Gilles's 10.5cm artillery battery in an assault, but not before they dealt terrible damage to the infantry trying to hold the line.
It came down to a final battle in the far corner of the table, but unfortunately Marko's ambush of 5cm PaKs could not do enough to stop both a platoon of Panzer IIIs and a platoon of infantry, and he lost 8-1 and ended up third overall with Gilles beating AM on their head-to-head result.

Interestingly, the top three were all German infantry lists, though with quite a few differences in that they actually contained.

The prize for best painted unit (the Monty objective) was won by Phil and his 17 pounder anti tank unit, with a unanimous decision by our independent judges: 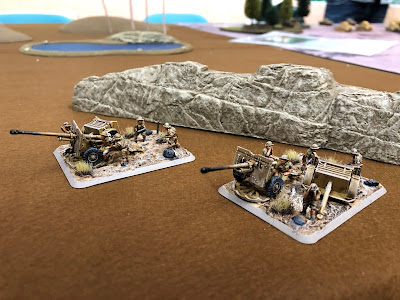 On 30-06-2018 we organised the third 'basics' workshop of  MaGie Miniature Painting at the Purperen Draak. This workshop was (again) a great success with registrations already being full, 3 hours after announcing the event.
This was the last 'basics' workshop in the series and will be followed by the 'advanced' workshops going into more specific area's. Do you want to explore a specific area in the next workshop?  Then leave us a message at groninger.wargames.guild@gmail.com or at the bottom of the post.
And now without further ado, the pictures of the awesome creations made today!

The wizard of Styrodur, Gerard Boom, was invited to the north for the second time. This time even followed by others from the other side of the Netherlands. You could say he is pretty popular, and with good reason. We where very happy to be able to host him again in the Purperen Draak.


Apart from the two always present hobbyists we had an all new cast of enthusiasts to join us.
So the two day workshop began, but the pictures tell far more than my lines of text will ever do. So here is our photo report.

Two of our attendants brought their previous work to inspire, and well, that's what they did!

Of course Gerard also displayed his examples and current projects:

Well, that's it for now. Was your enthusiasm tickled?
Then make sure to keep an eye out for Gerard's next workshop!  We will announce it on our Facebook page.


Every Thursday night we rent part of the gaming area at the Purperen Draak for our wargames night.

This is a laid-back way to play some games and hang out with your fellow wargamers.
Members can also make use of the broad selection of game mats and terrain owned by the GWG to make sure your battle looks nice too.

Because we have limited space, we require players to book a spot b…